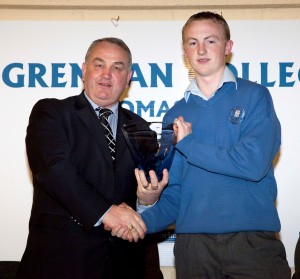 Mr Nicky Brennan, Leas Uachtarán, CLG, was guest speaker at this year’s Student Awards Ceremony at Grennan College, Thomastown, when students, parents and staff met to acknowledge the achievements and successes of students throughout the past year.  Mr Brennan presented awards and medals to students for their academic and sporting success. In his address he congratulated the recipients on their achievements and urged them to remain focussed on their goals, and to learn to say “no” to the temptations and distractions with which they will inevitably be faced in the years ahead.

Other award winners were: