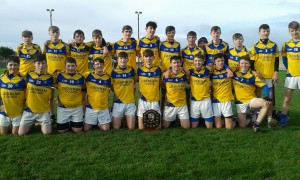 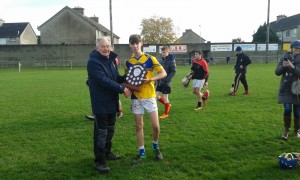 GRENNAN COLLEGE 2-10  CALLAN CBS 1-9
Grennan College are South Leinster Junior hurling champions after a dramatic late victory over Callan CBS on Friday last in Larchfield.
Both teams were evenly matched in what was a physical and pulsating encounter.  Callan led by 2 points at half time but as the clock ticked into injury time the sides were deadlocked as Grennan substitute Ciall O Connor stood over a sideline ball 60 yards from goal. O Connor cut a superb ball all the way into the square and when it eventually broke to Jack Kerins his speculative effort somehow ended up in the back of the Callan net.  From the puck out Colm Whelan shot the insurance point and ref Paddy Neary’s final whistle signalled frenzied celebrations.  This was a collective effort from a hard working Grennan side who just about deserved their victory.
Jason Brennan made one fantastic save at a crucial stage of the 2nd half.  Eddie Donnelly was brilliant at full back and cleared the world of ball. Michael walsh was immense throughout at centre back.  Up front Liam Treacy worked tirelessly for every ball. Jack Holden, with his free taking and ball winning ability made a massive contribution to this victory. Jamie Holden showed real leadership in the 2nd half scoring 2 wonderful points and winning numerous frees. Colm Whelan was a menacing threat at full forward and finished with 1-2 to his name.
Captain Jack Kerins  accepted the trophy from Kilkenny legend Pat Henderson and dedicated the victory to our former caretaker Mick Conlon who recently died.  A fitting end to a great day for the school.
Panel – Jason Brennan,Gordon Whelan,Eddie Donnelly,James Delahunty,Jack O Byrne,Michael Walsh,Cathal O Neill,Jack Kerins,Ken Knox,Liam Treacy,Jack Barcoe,Jack Holden,Adam Farrell,Colm Whelan,Jamie Holden,Ciall O Connor,Luke Walsh,Jack Skehan,Tom Cullen,Ben Carroll,Nathan Murphy,Tom Holden.