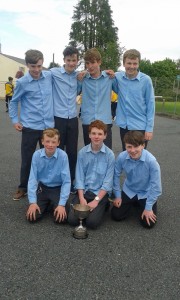 After a month of proper court soccer 1A defeated 2A 3-0 in the replay of the 1st and 2nd year league final. This league has provided fantastic lunchtime entertainment and 1A are fully deserving victors.
Adopting Leicester City style tactics they conceded 90% possession and then buried their opponents with three clinical counter attacks resulting in goals from Ryan Malone,  Jack Skehan and Liam Treacy.

2A went into this final as clear favourites but despite the best efforts of Jamie Holden and Jack O Byrne they failed to break through a resolute defence superbly marshaled by Tom Cullen.
Captain Malone accepted the cup on behalf of his class mates while skehan was awarded man of the match.
Tom Cullen was crowned player of the tournament.

The save of the tournament goes to Rory sheehan who displayed cat like reflexes that the great Peter Cech or even David DeGea would have been proud of.
Goal of the tournament was Ryan Malone’s stinging half volley during the group stages.
Every game was played in a fantastic spirit and we’ll done to all students who participated.